Yeeee-hah! We’ve finally landed on Mars. That is to say that many months of planning has now reached a climax and we’ve moved into our new home in Mars Street, Kensington, Johannesburg. 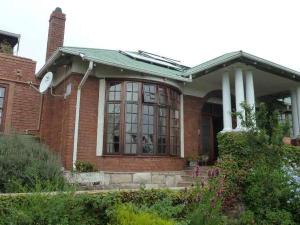 Lots of furious painting of walls, changing of light fixtures and general DIY has given me chapped and calloused hands, but the results are worth every battle scar.

The house is a lovely old Kensington house perched on a ridge with views for days and a delightful secret garden. It also has a deck that hugs a Jacaranda at branch height where we have put a large table for many lunches on Mars. (Watch this space.)

The wonder of it all is that the house was built in 1926 and is still very much intact. It hasn’t had the soul renovated out of it by a succession of ambitious owners, in fact it still has original tiles in the bathroom, WC and kitchen. The changes that have been made are sensitive to the original house and very well executed. But this is not a home reno blog…

The kitchen. Of course there was no such thing as a fitted kitchen in the Johannesburg of 1926. A kitchen, like the other rooms, had furniture. This has been the room’s saving grace, because owners past probably changed the furniture quite frequently without having to gut and redo the room. (I think there might be a lesson here…)

This integrity of the original led me into a bit of a dilemma. How do you prepare a kitchen for modernist cooking without destroying its history? How do you “update” a kitchen but keep it in line with the mostly 1930s art deco / streamlined modernism look that we pursued in the rest of the house?

I recently read the most wonderful book, Consider the Fork: A History of Invention in the Kitchen. In the book (pp 359-362) Bee Wilson (@KitchenBee) makes a few insightful points about our current obsession with the “perfect” kitchen; whether this is a period perfect reconstruction containing nothing that was not made in the period concerned, or a ‘perfect’ contemporary kitchen with everything new and matched to within the proverbial inch. Both of these are illusions. She explains: “In the kitchens we actually inhabit, old and new technologies overlap and coexist… There is something sad as well as wasteful about the current impulse to start a kitchen from scratch: to rip out every trace of the cook who came before you. It feels forgetful.”

I sincerely believe that cooking and eating involves a large dose remembering and creating memories. As a result, this amnesia induced by ripping out the old seems slightly disrespectful.

I’m going to cop out of a detailed description of what was there and what I did. Instead I’ll just post a few before and after shots. Hopefully I have achieved renewal with respect. This is, of course, still a work in progress but here goes…